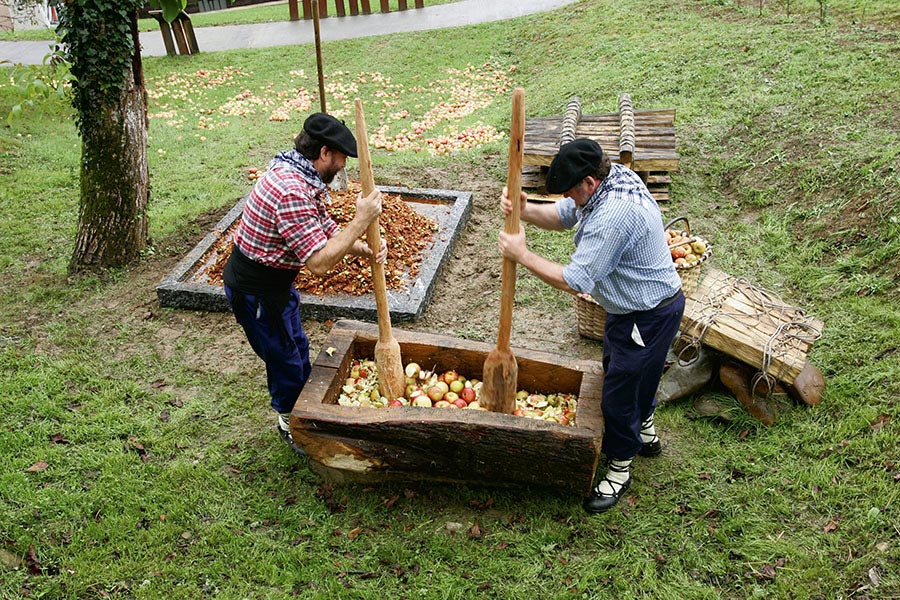 We are in front of a press of the Neolithic (in Euskal Herria 3,000 years ago). In this press, the entire process of making cider was manual: after crushing the apples with the pisons, the patsa (crushed apple) was placed in the center of press and pressed with various wooden logs that put pressure thanks to the lever effect that was created with the weight of the stone.

From this first press, in Euskal Herria other types of presses have been developed:

1) Press with beams: Built in the 16th-17th centuries, they occupy the entire farmhouse and are known as “press farmhouse”. The Igartubeiti Farmhouse Museum (Ezkio Itsaso) is a clear example of this type of press.

2) Spindle presses: Built in the 17th century, they are made of wood and small spindles exert pressure. An example of this type of press is Gamioxarrea (Arizkun).

3) With iron shafts: Built in the 19th century, they are those that have an iron shaft. The Katxola farmhouse (Donostia) is an example of this type of press.

Did you know that the origins of txalaparta (percussion instrument) are linked to cider culture? It announced that apple pressing was complete, and invited all those involved in the work to taste the must.

This video shows the cider process at Igartubeiti Farm Museum.

At this point of the tour, we invite you to go down to the press and to practice the kirikoketa with the trunks while you listen this audio. Don’t forget following the rithm!

A farmer from Astigarraga describes his farm house’s works: the apple picking with the kizki and the cider production in the press.